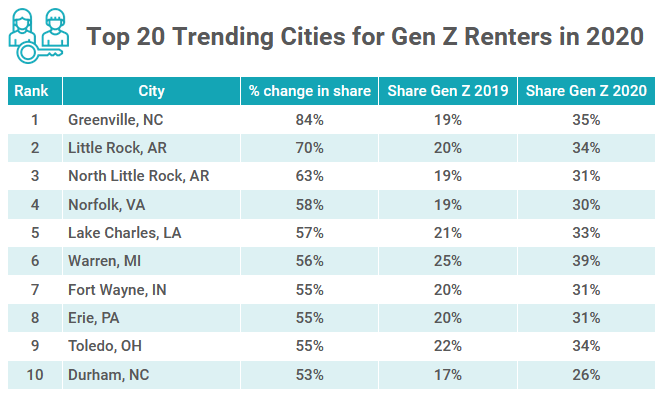 RENTCafé sourced research based on rental applications processed by RentGrow. In 2020, Greenville saw a sharp increase in the shares of Gen Z renters, earning marks for the trendiest spot for young renters.

“This ranking is another example of the livability and affordability we have here in Greenville and Pitt County,” explains Greenville ENC Alliance president and CEO Steve Weathers. “Our area, home to East Carolina University and Pitt Community College, is positioned to help young people thrive and succeed. As they rent homes or apartments, attend higher educational programs, or begin their careers, we want to retain them. There is a place for them in our workforce and community long term.”

Greenville, NC places first in the ranking, having seen the sharpest spike in apartment applications submitted by this generation in 2020. Research by RENTCafé shows an 84% increase, adding that Greenville has established itself as a great community to live in and to launch a career. With less than 100,000 residents, researchers say that Greenville is the only college town in this ranking. The study defined “college towns” as cities or towns where the percentage of out-of-town residents aged 18-24 is above 25% or the percentage of residents enrolled in college is above 25%, as per U.S. Census data.

Gen Z is defined as the generation of people born between 1997 and 2012 while Millennials are the generate born between 1981 and 1996. The trendiest Gen Z cities are concentrated in the Midwest and Southeast. Nine of the 20 cities on this list are located in the Midwest and eight are in the South — far from the coastal cities previously favored by Millennials. Notably, they are small and mid-sized cities and towns, most with fewer than 300,000 residents, a relatively low cost of living, and apartment rents less than the national average, which is around $1,400.

Asked to provide an expert opinion on this trend, Jill Ann Harrison, a sociology professor at the University of Oregon, argues that economic factors are leading people to look at smaller, more affordable markets and see their potential.

“It is easier in these places for people to take risks to becoming small business owners and contributing to the local economy and culture,” said Harrison. “These smaller markets offer an opportunity for younger adults not just live in a place, but to help to create or contribute to it in meaningful ways. In turn, many of these smaller cities have a truer sense of authenticity that is certainly serving as a pull.”

She adds that one of the main benefits is that renters get more for their money in small and mid-sized cities, like Greenville, compared to what they do in larger areas or cities directly on the coast.

“Younger people are willing to trade off living in a crowded, bustling city for having more space at home,” said Harrison.

There are several other cities in North Carolina that are listed as trending cities with high increases in Gen Z renters. Durham makes the list with a 53% increase from 2019 to 2020. Other North Carolina cities include Chapel Hill, Greensboro, and Asheville.

Rental application data was sourced from RentGrow, Inc. and was received completely anonymized and aggregated. The study analyzed rental application data from January through November of 2020 and January through November of 2019. Applicants of Gen Z age refer to adult applicants only. The analysis was based on data from over three million rental applications from RentGrow, Inc. for approximately 40,000 apartment communities nationwide. To view the full study and learn more about the methodology, click here.